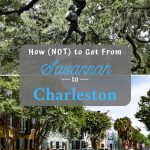 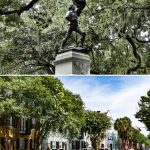 This page may contain affiliate links which helps me offset the costs of this site. It is optional to use them, and your support is greatly appreciated by doing so. Thank you.

The distance between Savannah Georgia, and Charleston South Carolina is small enough that there are many ways to get between the two cities. The two cities are only about 150 miles away from the other, as the crow flies. While there are no direct flights, there are buses, trains and it’s close enough that driving may make sense. I recently spent some time in both cities and had planned to take the train, but it was one of the travel misadventures that I occasionally have.

How To Get from Savannah to Charleston

As I mentioned before, there are several ways to get between the two cities. There are buses, trains, and you can drive. Here are the best ways to get from Savannah and Charleston.

Savannah to Charleston by Bus

There is a bus that goes from Savannah to Charleston. It’s a Greyhound bus operated by an affiliate called Southeastern Stages. However, there is only one bus in each direction per day. The Savannah Bus Station is a short Uber ride from the downtown area – as short as a half a mile. An advance purchase bus ticket costs $32. The bus leaves at 6:30 AM and arrives two hours later. That is way too early for me!

If you’re an early bird, then you’ll have nearly the entire morning to see Charleston.

There is also a shuttle that runs between the two cities, with one trip a day each way. You must book your ticket at least 24 hours in advance on BasinBus.com. It departs the Trade Center Landing, across the river from downtown Savannah, at 1:30 in the afternoon. The shuttle is $59 each way. According to the website, hotel pick up/drop off on each end is an addition $6, but when I went through a booking and added hotel pick up, it did not add this fee (YMMV).

Driving from Savannah to Charleston

In case you prefer to drive yourself, it is an easy drive. It’s a fairly straight forward 2 hour drive, but there isn’t much to see. You could take a detour to Hilton Head which would add just 45 minutes driving time.

You definitely do not need a car in either city, as they super walkable. Ubers are plentiful in both cities and there are free buses within the Historical District of Charleston. I only recommend driving if you’re on a road trip and Savannah or Charleston are part of a longer itinerary.

Amtrak runs two trains a day from Savannah to Charleston – the Palmetto & the Silver Meteor. The train is also the quickest option to get between the two cities, at a mere hour and a half travel time. Advance purchase of a train ticket is just $22 each way, making it the cheapest option!

The first train leaves Savannah at 8:20 AM, and the second train leaves at 7:30 PM. In my opinion, the timing of these trains is ideal. You’ll have an entire day in either city to see things, depending on which train you take. This is also true, aside from the departure times, if you’re traveling in the opposite direction.

How NOT to Get from Savannah to Charleston

My trip to Savannah and Charleston was the first time visiting either city. My plan was to take the morning train to Charleston. I love taking trains. They give me the option of getting work done or relaxing. On this train ride, I was going to do a bit of work and look at what to do during my first day in Charleston. Not all things go as planned.

There’s an old Yiddish saying, “Mann tracht, un Gott lacht” – meaning man plans, and God laughs. I had a plan and it did not go well.

My Plan & What Happened

No doubt that you see where this is going. I missed the train. For the first time in my life, I missed my ride to get somewhere else. After hundreds of flights and train rides that I have taken in nearly 40 years, I have never before missed one through my own fault.

So far, what I was kicking myself about was that I missed it by less than a minute. I ran after that train and just as I was getting to the last car, it left. I was within about 15 feet of the last train car when I stopped running. It was like a scene from a movie where someone is running after the train, usually to stop the love of their life. Only it was me and I, unfortunately, was not in a movie, and there definitely wasn’t anyone watching for me out the train window (please let me know if I am wrong about that!).

So, how did I miss the train?

I’m one of the more punctual people I know. For flights and trains, I usually even give myself more time than needed. So how did I miss my train from Savannah to Charleston?

To fully understand how this happened, you have to understand something about Savannah. People that live in Savannah don’t tend to stray far away. Travel, for most people, isn’t something that is done much – at least not to places outside of Georgia.

I know that I’m making a generalization, so allow me to explain. This is the feeling I got when talking to locals. I took about a half a dozen Lyft rides throughout my trip. Out of all of the drivers, two knew that there was even a train station in Savannah, and not one knew that it went to Charleston. This should have been a big clue to me that perhaps I should give myself more time than I thought I needed.

Out of my own laziness and/or procrastination, I left some packing I needed to do for the morning I left Savannah. Also, I didn’t request a Lyft until after I had checked out of the hotel. The app said my ride was 3 minutes away; however, Downtown Savannah is full of narrow one-way streets (yet another clue). It was slow to arrive and took over 5 minutes. Once I was picked up, I told my driver that we were cutting things close to catch the train. Despite that, he wouldn’t drive any faster. Bottom line, if I had done any one thing a bit sooner or a bit quicker I would have gotten there on time.

How Did I Get from Savannah to Charleston?

After getting over the fact that I missed the train, I considered my alternatives: wait for the evening train, or rent a car. My ride from Savannah airport to the Andaz asked what I was doing after my time in Savannah. I don’t like to be very open about plans when I am traveling solo, but told them that I was going to Charleston. After she asked if I was going to fly (what???), she said they take people to Charleston and I could do that. I laughed on the inside thinking “why would anyone take an Uber that far?” She was one of the drivers that had no clue there was a train station in Savannah.

I went inside the station and got my laptop out to search for rental cars. What’s this? No WiFi?! Yea… the train station does not have WiF! I was more than a little surprised. Of course, I could use my phone but I prefer using my laptop to do certain things, especially find good deals on rental cars.

A last minute one way rental car would have cost me just over $170. That doesn’t include getting to and from the rental car facilities, or gas. Even though gas is just about half the price than it is here in California, I estimated that renting a car would have been closer to $200.

So my options were wait or take a Lyft (ugh!). There are plenty of things to do in Savannah, as there are in Charleston. I had been told, before this trip, that I should give myself more time in Charleston than Savannah, so waiting nearly 12 hours for the evening train wasn’t appealing to me.

Much to my chagrin, I opened the Lyft app. I knew this was a risky venture. You never know what kind of person the driver is. It could be a very long 2 hours ride to Charleston. The fare estimate was nearly $160. Was this worth saving about $40?

I took a deep breath and tapped the pink Request Lyft button. At least I’ll use my Chase Sapphire Reserve and get 3 points per dollar and I don’t have to drive on unfamiliar roads. I also have my Lyft account linked to my Hilton, Delta & JetBlue accounts so I got points in all of those programs as well.

Lyft Ride from Savannah to Charleston

The ride was 110 miles and took almost exactly 2 hours. My luck seemed to have turned and I got one of the nicest drivers I have ever gotten. I have had 20 minute Lyft rides that seemed longer! We talked about nearly everything – including politics which I typically try to avoid when traveling. When I got dropped off at the Hyatt Place/Hyatt House Charleston, he even thanked me for “not having to talk about any of the same things twice”.

Thoughts about This Travel Misadventure

During those two hours, I learned that drivers based in Georgia cannot pick people up in South Carolina. It would be a long drive back for him without a fare, so I gave the driver a fairly significant tip.

In hindsight, I wish I gave him more. At the time, I was still kicking myself, with certain four letter words, that this trip is costing me $200 more than I had budgeted.

As much as $200 hurts the wallet, I realize that stuff happens. You are welcome to substitute your own four letter word in there, but I’m trying to keep this PG. I have had pretty good luck on my travels in recent years. This was merely a hiccup in my plans and I know that I have to roll with the punches. I’m aware that I am fortunate enough that I don’t have to worry too much about the money – perhaps if I did, then I would have waited for the evening train.

What would you have done in this situation? Do you have a similar story? Leave a comment and let me know!