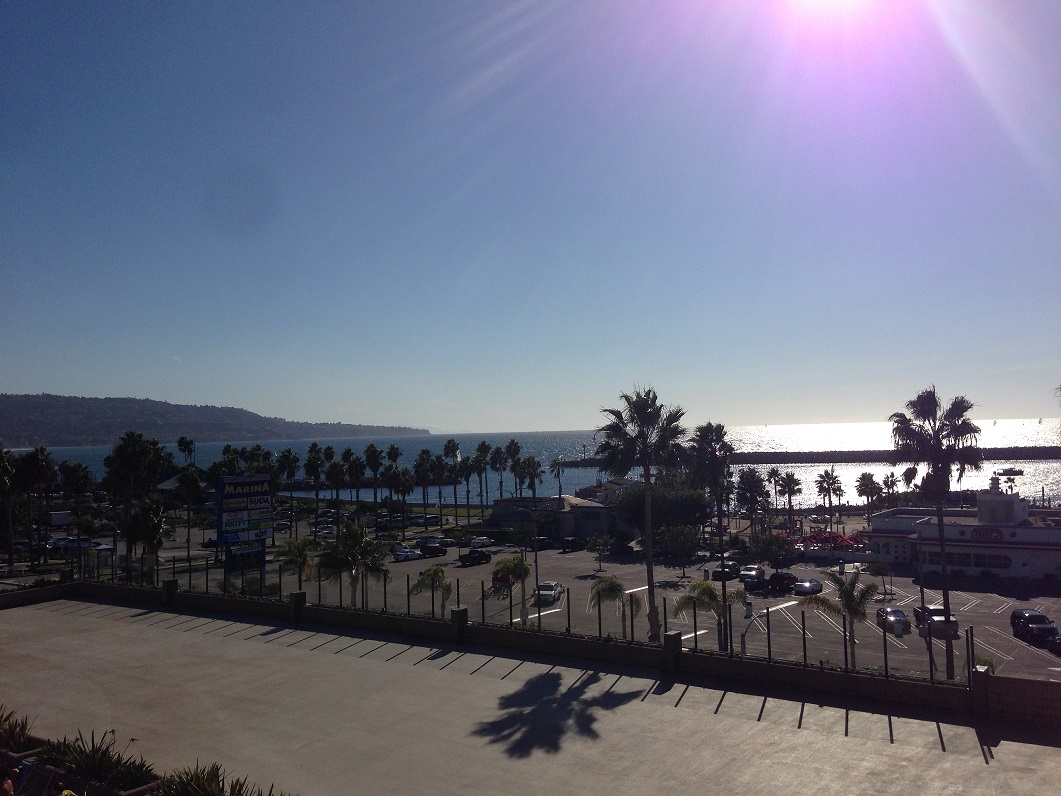 As I mentioned in my Rant Against IHG, I recently had a 2 night stay at the Crowne Plaza, in Redondo Beach, CA. I was there for a friend’s wedding and was with several of my friends under different reservations.  The Crown Plaza Redondo Beach isn’t a large hotel with just 342 rooms including 7 suites spread out amongst 4 floors.  The hotel is located across the street from the Redondo Beach pier and marina.  I arrived a little more than an hour before check-in and the front desk agent was happy to check me in early.  I think he was fairly new because he was getting help from someone else.  It slightly slowed down the process but I was upgraded to a room on the club lounge level.  I was offered a welcome amenity and I took drink vouchers.  I had a choice of points, a snack or drinks.  Since I was with my friends and was there to have fun, having drink vouchers would be nice to have.  I smiled, said thank you and headed to my room.

The lobby was airy and spacious.  It even has a large fish tank with tropical fish in it.  The picture really doesn’t do it justice.

What can I say? The room is a typical hotel room.  It was pretty spacious, but the layout was very typical.  The bed was very comfortable as was the arm chair and ottoman.  I actually almost feel asleep sitting in the chair.

I didn’t like that the room was a connecting room (notice the door in the above picture) and my neighbors were very loud through the entire night.  I didn’t think to ask if it was a connecting room because I didn’t think that there would be any on the top floor of the hotel.  Beware of this if you stay here!  What I liked most was the view I had from the balcony.  Even though it was very small, it was angled so that it gave an optimal view of the ocean and marina, as well was the pool and tennis court.  It was beautiful and relaxing sitting there watching the sun go down.

The view was great, but it did seem like there was a lot of noise from the pool area even though there was only about 15 people there.

As I mentioned, my room was upgraded to the 5th floor, which includes access to the lounge.  I didn’t pay a lot of attention to it until the first morning when I wanted to get some breakfast.  I was thwarted by the operating hours of the lounge.  It is only open from 6AM to 9AM (and for a couple hours in evening for drinks) on Monday through Friday! WHAT?!?  It is unfathomable why this would be.  The hotel isn’t located in a corporate area where they have a large amount of guests on business.  I didn’t say anything about it as I didn’t think of doing so and I had found a nearby restaurant that was within walking distance.  Eating at the restaurant was probably better than anything I could have gotten in the lounge anyway.

I had a back-to-back reservation at the Crowne Plaza and I went to the front desk to recharge my room key.  I was surprised when the clerk asked if I had received all my vouchers for the stay.  I was confused and at first thought she meant the vouchers from the welcome amenity.  Instead, she meant meal & drink vouchers because the lounge was closed.  She handed me several more drink vouchers in addition to my vouchers for my welcome amenity.  I realized that I should have been given vouchers for drinks the night before and breakfast but the clerk made up for it by giving me a couple extras.

My stay ended on a Monday so I poked my head in the lounge to see what it offered.  I had plans for breakfast with my friends so I was planning on only getting some fruit and coffee.  The spread was quite nice and had some good variety, including several hot dishes.  The coffee machine served different espressos and coffee drinks but was one of the worst lattes I have ever had.  The room itself was small and if I wanted to stay and eat I would have had a hard time finding a place to sit.  It was quite busy and unfortunately I wasn’t able to take a picture of the lounge.

Cleanliness: 5/5 – even the restroom in the lobby was very clean.  There was never any trash sitting on a table or counter top that I noticed.
Comfort: 5/5 – I don’t usually sleep well in hotels and this was no exception.  The comfort of the arm chair pushed this up to a 5.
Location: 4.5/5 – the hotel is in an excellent location to be able to walk to the pier, marina and surrounding areas.
Service: 3/5: The lack of training by the front desk clerk when I initially checked in dings the service score.  Everyone else, including the bartender, was very nice and friendly.

Despite the snafu with booking the rooms, I know that the fault lies with IHG, not the Crowne Plaza hotel.  I have tried to put it aside and give a more objective review. There isn’t another viable hotel nearby so prices tend to be a little higher than expected.  Without having that much to complain about, I would probably stay at this hotel again but only if I had multi-day events planned within walking distance of this hotel.

Overall, the Crowne Plaza Redondo Beach is a nicer than your standard run-of-the-mill hotel but don’t expect a spectacular stay. Click here for the latest rates!