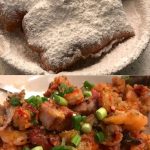 New Orleans cannot be described without mentioning food and where to eat. Quite honestly, no visit to the Big Easy is complete without eating gumbo or jambalaya at least a couple of times. Even though these two dishes are the mainstays of this region, there are many more that cannot not be missed. Follow this guide and you’ll be on your way to enjoying the best food that New Orleans has to offer.

Jambalaya is a paella-like dish which traditionally consists of rice, chicken, andouille sausage, and vegetables known as the “holy trinity” – celery, onion and green pepper. Other proteins such as pork, chicken, crawfish or shrimp are also frequently added. It is very easy to find this dish throughout the city. If you want a fun experience with some locals, head over to Coop’s Place.

This dive bar has eclectic decor and amazing service. Trinkets and bumper stickers plaster the wall which kept everyone visually entertained. Eater named Coop’s Place one of the top 10 places to eat on Mardi Gras. The jambalaya was recommended to me, by one of my tour guides, and it did not disappoint. The recipe at Coop’s Place is non-traditional as it is made with rabbit and sausage. I ordered the “supreme” jambalaya which additionally comes with shrimp and ham. If you prefer a more traditional jambalaya, I would recommend Oceana Grill.

When I was planning my trip to New Orleans, I had no idea how popular oysters were. Shout out to Elvis (my Uber driver, of course) for telling me otherwise! Walking around the French Quarter, I realized just how popular they are. They were the one food that I consumed multiple times. One of the most popular ways that oysters are prepared is charbroiled. Oysters are broiled with butter, garlic, and a pecorino crust. The best places to go for charbroiled oysters are Felix’s or Acme, but really, you won’t go wrong eating them anywhere they are served. They really are that good!

As I mentioned, I had oysters more than once during my visit to New Orleans. While that wasn’t my intention, I headed across Canal Street to a restaurant called Galier’s. The restaurant was quiet and mostly locals were dining there. I went there with the intentions of getting gumbo. After striking up a conversation with the bartender and another guest, they both (nicely) refused to give me any recommendations other than oysters. There’s a happy hour special on raw oysters ($9 for a dozen!) so who am I to complain? Just 20 feet away was the oyster shucker and not 5 minutes later I was eating 12 decadent oysters. About halfway through eating them, I looked down to find 3 more added to my plate and the oyster shucker walking away! I was so full!

Similar to jambalaya, gumbo is the other staple of N’awlins cuisine. The difference is that gumbo is cooked in a roux which makes it more like a stew/soup. The traditional recipe has more seafood compared to jambalaya. The gumbo I had, at 30/-90, on Frenchmen St., was delicious. However, everything on the menu, including the gumbo, was overpriced – as in “$7 for a draft beer during happy hour” overpriced! Instead, head over to the Gumbo Shop or Galatoire’s… trust me, I wish I did!

Mu-fu-whata? Muffuletta is a very filling Italian sandwich that originated in New Orleans. The rumor is that Salvatore Lupo created it when he owned the Central Grocery store in 1903. Though Sicilians have been eating similar sandwiches for centuries. The sandwich is made with salami, mortadella, capicola, mozzarella, provolone, and olive spread on a Sicilian sesame seeded bread that is about 10 inches across! Sounds good, right?

The sandwich can now be found throughout New Orleans, but it was created at Central Grocery so really, why go anywhere else? It is located on Decatur St. – you won’t miss it!

I love food so much that I frequently plan what to do and see around where to eat. New Orleans was no exception and it is definitely one of my favorite cities because of the amazing food. The places I mentioned here were my favorites. That being said, do you think I made a mistake or left out your favorite restaurant? Feel free to let me know! I’ll be happy to add it.

Pin this to save for later!